I want to pick up on a question that I posed at the end of my last post, in which I asked, “How might the humanities, precisely in terms of some of its principal objects (art, poetry, literature, film), equip us with the means to contend, not only with the limits of humanism, but also with the end of the human?” 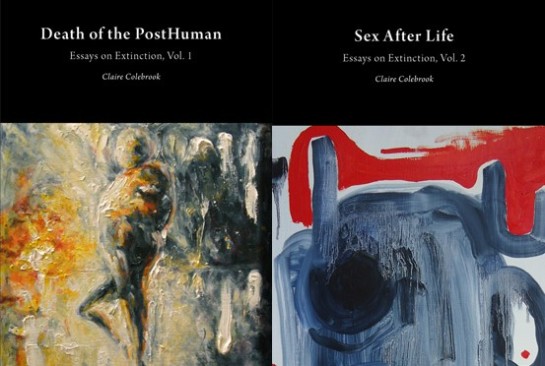 This summer I have been reading and gaining a tremendous amount from Claire Colebrook’s two volumes of essays on extinction: Death of the PostHuman, and Sex After Life. At the same time, I have been crafting the course syllabi for the two seminars that I am teaching this fall term (2016).

Upon first glance, it may appear that the two seminars, “Queer Ethics & Aesthetics of Existence,” and “The Collective Afterlife of Things,” are at odds with each other. With their respective focus on questions of existence and extinction, it might seem as though the first course seeks to affirm the value of a certain form of human life, while the other seeks to consider the post-human and that which is not defined in terms of “life.” However they are in fact two major parts of a single ongoing theoretical endeavour to think what a thought and ethical-aesthetic praxis might be, in the absence or extinction of the human, life and, the living on or long-term survival of a collective “we.” Colebrook’s work has proven to be an indispensable companion as I think about these two courses in relation to each other.

Rooted as it is in the Foucault of finitude and the image of the erasure of the image of the human, “like a face drawn in sand at the edge of the sea,” the queer theory seminar takes Foucault’s aesthetics of existence to be not an ethics of being or becoming, but of unbecoming. An unbecoming ethics is the partaking-together in the inoperative/workless praxis of sustaining the spacing of separation—irreducible to no-thing or substance (i.e. nothing, res/rien)—that exists (exposed) just between us. An “us” that only exists from out of this shared-exposure to the outside, or what Foucault referred to as “madness, the absence of work.” Therefore, this queer aesthetics of existence is an art not of the finished work (oeuvre) but of the un-finished as that which is not given or even readymade, but already-unmade (désoeuvrement).

Further to the point, “whereas [as Claire Colebrook explains] Husserl and Bergson thought that the task that would save thought and philosophy would be the annihilation or acceleration of the natural world, and the destruction of man as a natural body within the world, today it is the possible extinction of the man of ethics and philosophy [and aesthetics] that may allow us to consider the survival of the cosmos” (Sex After Life, 148).

If we take “the man of ethics and philosophy [and aesthetics]” to be the “man of the humanities,” then in a certain very real sense, it is this equation of the end of the humanities with the afterlife of the cosmos that both seminars are dedicated to thinking. Ethics after community, collectivity and life is an ethics of the “collective afterlife of things,” in which, following Colebrook, it is not assumed that there is a “we” (“collective”) worthy of living on (“afterlife”). Which is to begin to think an ethics of inorganic and un-livable existence. In other words, a (queer) ethics and aesthetics of extinction.

Through these seminars and in our reading of Foucault, Colebrook, but also Haver, Genet, Benderson, and Bersani, we come to the realization—without any sense of mitigating irony—that perhaps only the end of the humanities can save the cosmos now.