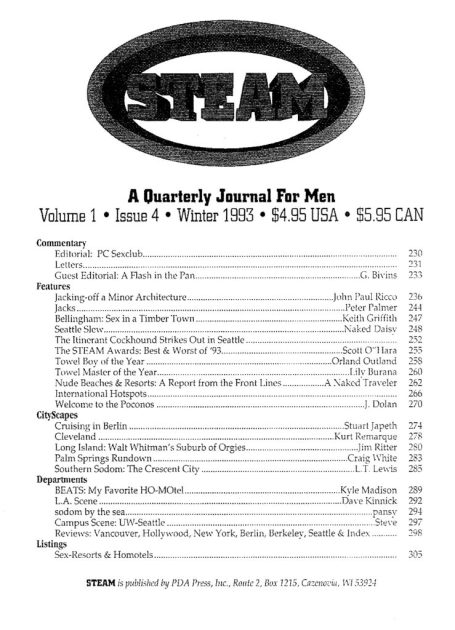 “Jacking-off a Minor Architecture,” an essay that I published in 1993, has just been re-published in the online journal Keep It Dirty, in an issue on “Filth.” Editor Christian Hite approached me this past spring, believing that the essay deserved to be read—and perhaps more widely—23 years after its original publication. Having written a doctoral dissertation on masturbation and other technologies of arousal, this essay caught Hite’s attention, along with a second of mine on semen and the fluidity of body boundaries, that I had published around the same time in Gay and Lesbian Studies in Art History (edited by Whitney Davis).

To accompany the republication, I have written a preface in which I discuss the genesis of the text and its relation to emergent queer theory. While the political ethics of sex and architecture that I was experiencing, theorizing and writing about back then, have been pretty much eclipsed over the past 23 years by the very forms of bio-political governance and forces of domestication and assimilation to which queer anonymous sex stood opposite and refused, still there might be lessons to learn from a moment when, in the face of death and at the risk of life, masturbation was promiscuously communalized.