We recall what was perhaps the most pervasive and frustrated accusation waged against the Occupy Wall Street movement: that it operated without an articulated political agenda, program, manifesto, and set of specific goals and objectives. But while in certain respects this is inarguable, at the same time OSW represented, or better, demonstrated—in the very form of its particular spatial presentation (occupation)—how it is that “to occupy” can mean to come together and to be occupied with belonging (being-with and -together), in public, amongst other anonymous strangers and passersby, while at the same time “not being preoccupied with ends.” It is the latter phrasing, which I take from Jean-Luc Nancy, that can begin to serve as one definition of the political in its praxis and spacing. It is through this non-destinal and inoperative praxis (when it comes to the imperative for “ends”) that a group is capable of being formed, and in such a way that the group and its formation (assemblage, occupation) together can be defined as political. The contention (which this blog is an attempt to affirm) is that perhaps before we speak of a “coming community” we might need to give ourselves over to the idea of an “unbecoming community.” OSW was one of its more recent manifestations.

When it comes to theory, friendship, and the conversation that can ensue between and through the two, the question(s) of what we wish to hold on to (terms, words, concepts), which we want to abandon, is always fundamental to their shared sustaining. In particular, words of and from the other, including and perhaps especially when that other is for you, someone like a brother. This is what we might refer to as a “fraternization (or not) of terms.”

These thoughts occurred to me recently, as I was reading a draft of a current essay by my friend Philip Armstrong, on fraternity and friendship in the work of (and between) Jacques Derrida and Jean-Luc Nancy. (Philip’s piece is forthcoming in an issue of the journal Diacritics; it is outstanding, so be sure to track it down).

As a partial response to the question as to which words or terms we wish to hold on to, to retain, to willingly inherit, or to distinguish oneself from, we might say that it is always a matter of “more than one” and “less than one” which, as Derrida curiously suggests, at the opening of his lecture and what was to become the first part of his important late book Rogues, is a relation that is more elliptical than aporetic. For Derrida, the ellipsis is a figure for “minus one” and “more than one”—excess and withdrawal, at once.

This is something like the rhythm of originary abandonment and perhaps also of friendship, fraternity, or love. Not only an abandonment “from” identity, the proper, and self-same (or, conversely, abandonment by or of the other, in alterity), but as Philip so strongly argues, an abandonment “to”…the elliptical sense of shared existence in its sustaining (e.g. decision) of the spacing of separation (e.g. decision).

“Love” would be one of those “technical measures of equality” that Nancy speaks of in The Experience of Freedom, and that leaves Derrida—in the text cited above—so perplexed. Such measures are, for Nancy, forms of praxis that are “affirmations of the political.” Meaning, affirmations of the spacing of incommensurable sharing and sharing of the incommensurable, that is opened up and given access to, by the political. Each time, measured against nothing (this is “freedom” as Nancy defines it). It is this freedom, measured against nothing and not returning to itself, that renders this rhythm syncopated and overflowing (and hence perhaps something other than “aporetic”).

In Rogues, what Derrida says he cannot understand, is the way in which the incommensurable can be thought of as a measure, and a common measure at that. This also means that he cannot understand why Nancy would want to have retained the notion of fraternity, in his thinking of freedom, and as the name for partaking in this measure. Which is to say that for Nancy, what commonly goes by the name of “common measure” is the incommensurable, to the extent that sharing or being-in-common is always a sharing in that which is in excess of any general measure or equivalence (again, this, for Nancy, is “freedom”). It is as though the measure is not, nor can never be shared in common, since as measurable it will deny or appropriate the separated spacing that must remain incommensurable in order to be shared in its sense, and not say, simply exchanged in its value (according to a measure of general equivalence). Therefore, being-in-common is sharing, and sharing is partaking in the incommensurable, which is, in turn, the only measure of being-in-common.

The Boys of Collodion

The young bare-chested men in this series of portraits, with their free flowng dark hair and their wide-opened stares, seem to harken back to the first decades of photography, as much as having been pulled from the local skateboard park. Glued to whatever it is that is confronting them head-on, their fixated gazes might betray the name of the place that they mythically hail from: Collodion, from the Greek kollōdēs, meaning “gluelike.” Looking as though they have become suddenly entranced by the song of the sirens, or nearly petrified by the head of the gorgon, the boys of collodion are our modern day kouroi. Stripped of colour except for a single red badge—medal and scar—they are glued and unglued at once. 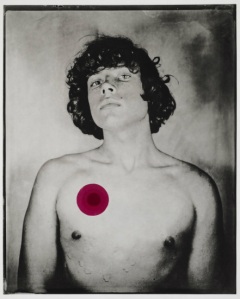