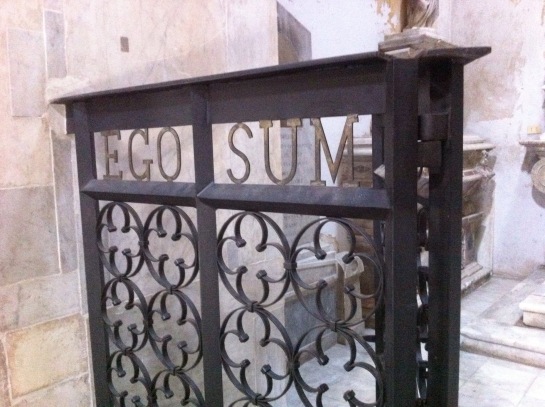 My research and writing this year has been primarily focused on completing a draft manuscript of my book, The Outside Not Beyond. This work has been aided tremendously by a 12-month research and study leave, of which I was at the midway point at the beginning of the year, and by a 12-month faculty research fellowship at the Jackman Humanities Institute (University of Toronto) that began this past July. The project also received very generous support beginning this year from the Social Science and Humanities Research Council (SSHRC, the national granting agency in Canada), which will provide funding over the next four years for research, assistants, travel, symposia, etc.

So over the past year I have had the time, solitude and resources to read and write and make significant progress on my projects. I have found my office at the JHI to be a particularly conducive place to work, and I really value the time I have had over the past 18 months, un-interrupted from teaching and university service duties, to focus on my own work and to remain with questions for extended periods of time.

Having submitted a book proposal to the University of Chicago Press in December of last year, by June of this year I finally received two Readers’ Reports, both of which very much endorsed the project and provided valuable feedback. I then turned my official response to these reports into an occasion to write what amounted to a second proposal: 11-pages that further expanded on the first, and represented the project in its current state of development. I found this to be an extremely productive task, one that really enabled me to flesh out both the major and minor scales and dimensions of the project. I walked away from the experience even more an advocate of “the second project outline.”

Topics and themes that have been pursuing in my research this past year include: the relation between poetry and prayer; anonymity and the neutral; edging and drawing; collective afterlives; ethics, politics and aesthetics of the common; drive, pleasure, and slippage; and measure and measurelessness.

The course of my research and reading this year, began with Georges Bataille’s major writings and publications, and then moved to Foucault’s lectures on governmentality and biopolitics; Dardot and Laval’s extension and elaboration of Foucault’s project, in their indispensable book, The New World Order: On Neoliberal Society; Derrida’s final seminar on the beast and the sovereign and his reading of Robinson Crusoe alongside Heidegger’s seminar The Fundamental Concepts of Metaphysics; and Michael Naas’s beautiful reading of Derrida’s seminar in his book,  The End of the World and Other Teachable Moments. I’ve also returned to the political writings of Maurice Blanchot, as well as some of his late-work, in particular The Step Not Beyond, along with Christopher Fynsk’s fantastic book, Last Steps: Maurice Blanchot’s Exilic Writing.

Other books that came out this year that I very much enjoyed, and that have remained with me, include: David Graeber’s book on bureaucracy, The Utopia of Rules; Kristin Ross’s Communal Luxury: The Political Imaginary of the Paris Commune; Elizabeth Kolbert’s, The Sixth Extinction; and McFadden and Al-Khalili’s Life on the Edge: The Coming Age of Quantum Biology. This last title is its own frontline education on one of the most exciting new fields of scientific research.

While writing, “The Art of the Consummate Cruise and the Essential Risk of the Common,” a paper for a panel on sexual risk and barebacking for the American Studies Association conference (Toronto, October 2015), I also returned to the work of William Haver—which remains the most inexhaustible source of inspiration and insight—as well that of Leo Bersani, Tim Dean. I have been in conversation with editors of an online journal, and hope that this paper will be published very soon.

I also continue to try to make fiction and poetry a regular part of my reading list. Books that particularly stood out this year are: Hanya Yanagihara’s A Little Life; Nell Zink’s Mislaid; Michel Houellebecq’s Submission; and Claudia Rankine’s Citizen.

Publications this year included: “The Separated Gesture: Partaking in the Inoperative Praxis of the Already-Unmade,” in the collection Nancy and the Political (Edinburgh University Press); my conversation with Jean-Luc Nancy, “The Existence of the World is Always Unexpected,” in Art and the Anthropocene (Open Humanities Press); my essay, “Drool: liquid fore-speech of the fore-scene,” in the online journal World Picture; and my essay, “Parasol, Setas, Parasite, Peasant,” in, Could, Should, Would, a monograph on architect J. Mayer H. (Hatje Cantz).

The first review of my book, The Decision Between Us, appeared in the January issue of Art in America (by Christa Noel Robbins); and that has since been followed by equally sympathetic, insightful and enthusiastic reviews in Critical Inquiry (by Tom McDonough), New Formations (by Jacques Khalip), and in Parallax (by Matthew Ellison and Tom Hastings).

As part of a conference seminar on Bataille that I co-organized with Etienne Turpin for the American Comparative Literature Association conference (Seattle), I presented a new paper titled, “A solvent for ‘poetry’s sticky temptation.'” It was a first attempt to consider the relation between poetry and prayer as it can be fashioned through a reading of Bataille’s A-Theological Summa. A keynote lecture at a conference on aesthetics and ethics at The Royal College of Art in London, gave me an opportunity to return to and to expand upon my paper, “The Commerce of Anonymity” which is on the art of mourning, and artist Shaan Syed’s “The Andrew Project.” An invitation to present some of the my current research at the Comparative Literature Emerging Research Lecture Series, here at the U of T this past fall, was yet another opportunity to further expand and develop the “Anonymity” paper into what I now feel is pretty much a completed chapter for the new book. Finally, last spring at Poetic Research Bureau in L.A. I read from and discussed my book, The Decision Between Us, along with readings by Etienne Turpin and Nadrin Hemada from collections that they have recently edited on the library and the prison, respectively.

Currently, I am preparing two keynote lectures in March 2016, one for the annual Comparative Literature conference, here at the University of Toronto, and the other for “Aisthesis & The Common: Reconfiguring the Public Sphere,” at McGill University. Also in March, I have been invited to speak at the Society for Philosophy and Culture at McMaster University.

Research travel this year included time in NYC in February in order to visit the National 9-11 Memorial and Museum at Ground Zero; and to Sicily in late-August to attend a week-long seminar on “sex and philosophy” taught by Jean-Luc Nancy.

This was also the year when I revived my performance art practice. It had been close to 7 years since I last presented my work and I have been wanting to return to performance for some time now. Since the late-summer I have been in conversation with Johannes Zits, and along with him and three other artists we have been developing a new work together. Many details will be posted here in the months to come, but for now I can say that at the end of January 2016 I will be part of a five-person, 6-hour durational performance at Katzman Contemporary, here in Toronto; and in February, I will be participating in a five-day workshop with artist Doris Uhlich, on dance, sound, and the naked body. All of this work is deeply connected to my thinking and writing on the peri-performative; naked image and naked sharing; exposure, risk, touch and trust. I am really excited to be able to translate this work into various forms of performance.

I will end this post by saying how grateful I am for those of you who have subscribed to this blog, and who take the time to be its readers. Happy New Year 2016!