On Tuesday evening last week (Feb 11th), I landed in Cape Town, there to give two talks at the University of the Western Cape’s Centre for Humanities Research. In the lead-up to my talk (see previous post), scheduled for Thursday morning (just 36 hours after having arrived), I anticipated needing to say something—as part of my opening remarks—about the affects that jet lag might have on my state of mind, given that my body would be reminding me that the 11AM start time for the lecture actually felt more like 4AM Toronto time (and I’ve never given a public talk at 4AM before). What I could not have expected is that such remarks would end up including an even more substantial caveat by way of anecdote about a lighthouse. But nonetheless that’s what happened, thanks to a thick fog that descended on the coast of Cape Town Wednesday night—the eve of my talk Thursday morning.

I was staying at a tiny hotel at Mouille Point, in the south-eastern Green Point neighbourhood, in a hotel room overlooking the beach and the Atlantic. Almost directly across the street from the hotel is the Green Point Lighthouse, candy cane-striped and—as I was soon to discover—still very much a working lighthouse. 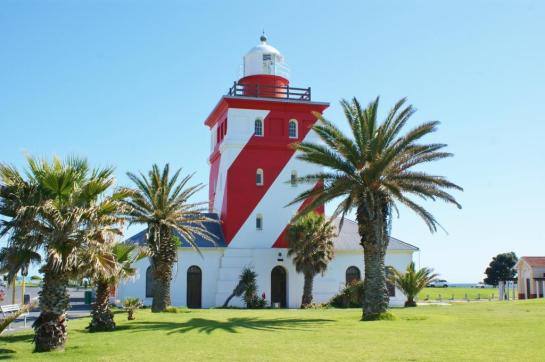 Around 1AM, as I was still struggling to fall asleep, my body and mind still very much attuned to the time zone that I had left behind two evenings ago, I heard a loud, mechanical moaning sound. The sound returned and was repeated every 30 seconds, and while at first I was not sure what it was, or where exactly it was coming from, not before long I realized—having gotten out of bed to look out the large sliding glass doors of my room—that it was the lighthouse’s foghorn.

Already worried that I would not be able to get the sleep needed in order to be bright and alert for my talk at the university the following morning, it was now certain that unless I took whatever measures I could to dampen, or better yet, to block this awful repetitive noise, there was little-to-no-hope of getting any rest whatsoever. So I dug out my ear plugs, only to discover that they were barely effective. At which point I thought: I’ll put on my noise cancelling headphones, and wear them OVER the earplugs. Still, no relief from the horrible, insistent moan of the horn.

At that point I was pretty much at my wits end. More than an hour having passed without any relief and feeling even more awake and annoyed. Texting my partner back in Toronto, he suggested that I try to create some sort of white noise. I dutifully downloaded an app on my phone, only to discover that it was subscription-based. Since I had no intention of needing to make this a regular part of my sleeping regime, I decided not to sign-up. What next? What were my (seemingly last) remaining options?

I remembered that I had an album of “Long Ambients. Calm. Sleep,” on my phone. Four hours in length, it was a series of 11 tracks that, for some reason, I had never bothered to listen to. Now was my chance. The tricky thing was to adjust the volume such that the music blocked the noise of the foghorn, yet was not too loud as to prevent me from dozing off. That took a bit of time to modulate, but at some point I figured I had gotten it right.

A few hours passed, and yet while much more drowsy and relaxed, it was clear that I was still not asleep. At that point I started to think about lighthouses and the purposes of foghorns. The way in which the latter were needed to send out alert signals and warnings from the coast; to ships out at sea that would not be able to see the shoreline and its rocky, shallow and hence treacherous waters in such thick fog. This lead me to think about shipping, and sounds that take the place of visibilities, and of hearing things in the absence of being able to see them. Curiously, this was one of the motifs of the talk that I was to give the following morning: on the auditory sonorous sound of the invisible flight of animals. As my reluctantly awake mind turned and churned under headphones, earplugs and ambient music, it started to make further connections between these things, such that the image of the great white whale of Melville’s epic tale came to mind: that enigmatic creature that largely eludes the seeing of Captain Ahab, but that might be understood to be heard in the fog of night, sending its own signal of warning, like the lighthouse and its own whale-like moan.

The lighthouse’s foghorn calls out to the ships, neither able to see the other, and yet still in a sort of resonance, one with the other. Since my paper is also about calling, including in the form of naming, but also in the sense of vocation, my mind inevitably returned to the Melville novel and its famous opening lines: “Call me Ishmael.” Melville here is re-writing the opening of the Gospel of John (“In the beginning was the Word”), now making clear that in the beginning the word was also the name, and specifically the latter’s exigency or demand: “call me…”

It might then come as less of a surprise if I tell you—thoroughly amused as I was by this further remarkable coincidence—that the set of ambient tracks I was listening to were put together by Moby, the pop musician and DJ, whose nickname was inspired by him being the great-great-great nephew of Herman Melville.