With the academic year winding down and the transition to a summer mode of writing and travel, I thought I would mention a few new publications, upcoming talks, and some news on the professional front.

I recently received my author’s copy of W.J.T. Mitchell’s Image Theory: Living Pictures, edited by Kresimir Purgar, Routledge, 2017. The volume is a wonderful collection of essays on Mitchell’s role in the formation of the field of visual culture, and the ways in which his work over the past 30 years+ has crafted a unique take on the question of images. From his book early book Iconology, to Picture Theory, What Do Pictures Want?, and his most recent Image Science, Mitchell’s thinking on the “lives and wants of images,” has evolved in exciting and infinitely fascinating ways. The essays in this book go some way towards re-tracing and elucidating this trajectory. My essay, “Showing Showing: Reading Mitchell’s ‘Queer’ Metapictures,” draws out from his well-known essay, what I have always seen to be an essential perversity of images, especially those “metapictures” that Mitchell has returned to again and again in order to craft this arguments over the years.

Out of this derives my premise that before there is either “seeing” or “saying” there is “showing,” or better yet, “exposing.” Meaning that images and texts mutually share in an exposure to that which exceeds any seeing or saying. So in addition to the visual culture project of “showing seeing,” I am interested in the ways in which images—including metapictures—and the field of visual studies, involve “showing showing.” So for instance, the recommendation to “expose yourself to art,” is itself based upon art’s prior mode of exposing itself to the world—us included. That’s what I like about the meta-picture photograph above: not only is the stereotypical figure of the flasher exposing himself to art, but art is also flashing back. In fact, I might go so far as to say that art, in its presentation and exposition, flashes us first.

In my contribution to the new collection of essays on Mitchell and his work, I was interested in this kind of metapicture, one that not only “shows seeing,” but goes further by “showing showing.” If the exhibitionist stunt of flashing is one version of showing, then the image of Alfred E. Neuman shown flashing on a fence bordering a nude beach—the picture with which Mitchell ended his famous essay on metapicture—might be regarded as a scene of showing showing. There is often humour—even a certain punchline—in any metapicture, and that is especially the case here. But metapictures are also puzzles, and here not simply in making us wonder and guess at what the nudists on the beach are reacting to as Neuman opens his trench coat, but what it means for him to be wearing a t-shirt that advertises, like some sort of perverse slogan “Flashers Against Nudity.”

It is through this mad and perverse double-image that I think of the metapicture in terms of its exhibitionism (or “expositionism,” if you will), and argue that the “image science” Mitchell has so beautifully articulated (especially in his most recent eponymous book) is also a “naked science” or science of exposure—of showing. Such a science cannot be contained within the discourses of seeing and saying, or even in their dialectical synthesis even though—as the metapicture attests—it is through such modalities of knowledge that this inescapable exposure to non-knowledge occurs.

Within the next month, two more essays of mine are scheduled to be published. The first, “Intimacy: Inseparable from Separation,” in a special issue on “labour,” of Open Set, an online journal publishing some of the most interesting work on art and the critical humanities. This essay is an expansion of the paper that I presented in early November at Brown University’s Pembroke Centre, in a symposium organized by Jacques Khalip titled, “Unmade Bed: In the Midst of Intimacy.” The symposium used my book, The Decision Between Us, and fellow participant Stacey D’Erasmo’s, The Art of Intimacy: The Space Between, as jumping off points, from which each speaker (David Clark, Ralph Rodriguez and Leticia Alvarado—in addition to Khalip, D’Erasmo and myself) drew from, as they worked through materials and questions that in one way or another involved the image, scene or object of an “unmade bed,” broadly conceptualized, and variously materialized in art, politics, medicine, kinship, museology, and forms of sexual and erotic intimacy. 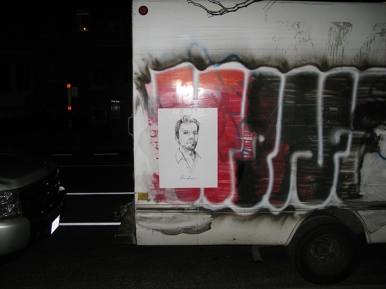 The other essay, “The Commerce of Anonymity,” will appear in the June 2017 issue of the journal Qui Parle (Duke University Press). Centred on “The Andrew Project” (2010-13) by artist Shaan Syed, the essay is a theoretical meditation on the politics and ethics of the name, drawing, the portrait, anonymity and the signature, as these bear on a shared sense of loss and its impossible commemoration. I invoke the figure of the urban stranger and passerby to argue for an aesthetics and ethics of social anonymity that does not rely on or demand identification and that thereby remains open to the risk, surprise and pleasure of shared existence. In doing so, I theorize intimacy as that which remains unnameable in the “commerce” of our everyday lives. If you’ve been following this blog (or my work more generally), you know that I have been developing this essay for some time, having presented versions of it at various conferences and workshops over the past couple of years. I am so pleased that it will appear in Qui Parle, a journal that I have admired and relied upon since I was a graduate student in the early-’90s. These days its editing is in excellent hands, and consistently features work by leading theorists and philosophers. I am proud and honoured to be featured in this next issue, alongside Jean-Luc Nancy, Bernard Stiegler, Chris Kraus, and Christopher Fynsk.

I am currently preparing three upcoming lectures. The first, “Mourning, Melancholia, Moonlight,” is a keynote for the “Feeling Queer/Queer Feeling” conference, to held at the University of Toronto, May 24-26, 2017. The second is a paper that I will discuss as part of a symposium on “pornographic and the pornographic” at the ICI Berlin (Institute of Cultural Inquiry) on June 22nd. Thirdly, I will participate in a 3-day seminar “Unworking, Dèsoeuvrement, Inoperositá,” as part of the ACLA conference (American Comparative Literature Association) that will take place at Utrecht University, July 6-9, 2017. My paper is titled, “Using as Not Using: Inoperative Aesthetics and Ethics after Agamben.”

Finally, I am very happy report that I have recently been promoted to Full Professor at the University of Toronto.

Markus D. Dubber, Professor of Law and Director of the Centre for Ethics at the University of Toronto, has invited me to participate in a workshop on “apologies” that he is organizing to be held in fall 2017. He tells me that it is “partly inspired by a recent report in which EGALE [Canadian Human Rights Trust] called on the Canadian government to apologize for ‘Canada’s History of LGBTQ2SI Persecution.'”

Here is the abstract of the paper that I have proposed to present at the workshop.

Following “On Forgiveness,” the translated and edited version of Jacques Derrida’s response to a series of questions put to him by the French intellectual journal Le Monde des débats in 1999, my paper argues that the concept and act of forgiveness is essentially queer. Derrida persuasively argued that true forgiveness consists in forgiving the unforgivable. Which means that the logic of forgiveness is structured as a relation to the impossible, to that which is without code, norm or end. It is in excess of any measure or finality. An ethics of apology, in which the State seeks forgiveness for its violence and persecution of its lesbian, bisexual, gay, queer, transgendered, two-spirited and questioning citizens, therefore requires forms of queer forgiveness that exceed the judicial logic of reconciliation. For if queers forgive the State of its violence and negligence, do they not also and at the same time abdicate the future possibility of acting in ways that the State would deem unforgivable? Say in the face of future injustice and in the name of justice yet to be had? Or perhaps in terms of erotic and indeed unconditional pornographic excess that re-conceptualizes sovereignty as unmistakably queer. In both cases: as that which transcends norm and law through a notion of sovereignty that we inherit from Georges Bataille. In other words: is the queer acceptance of the State’s confessed guilt also a normalizing of the queer within a stated-based juridical-theological discourse of rights? Must we not remain vigilant in our attention to the ways in which reconciliation is its own form of normalization? In doing so, we need to affirm the limits of the common, and of the ways in which while language itself is shared it is so, only as the very enunciation of separation. Alterity, non-identification, the unintelligible—in a word: queer—restlessly resides at the heart of apology and forgiveness. By returning to my theory of a disappeared aesthetics of erasure and the ways in which such aesthetics attests to the indelible absence of those who—unforgivably—have been disappeared and are no longer here to receive an apology and to forgive, I argue that this is one way to conceive the ethical scene of forgiveness.

Here’s a video recording of my talk at the panel on “Curating Sex and Sexuality,” that was held at University College (University of Toronto) on October 13th, 2016. Hosted in conjunction with the Royal Ontario Museum’s (ROM) A Third Gender: Beautiful Youth in Japanese Prints exhibition, the panel explored the questions of curatorial choice in the context of potentially controversial sexual representations. The exhibition is currently on view at the Japan Society in New York, until June 11, 2017.

In my short presentation, I discuss the pair of exhibitions on queer contemporary video art that I curated at V-Tape (Toronto) in 2008: “Love in a time of empty promises,” and “Sex is so abstract.” A revised and slightly expanded version of my paper, “Queer Curating: Abstract and Abject,” will be included in a collection of essays and portfolios on LGBTQIA issues in art and politics, to be published in the September 2017 issue of the bilingual journal of “arts + opinion” Esse.

The other three panelists’ presentations can also be viewed on YouTube.