This is the remarkable text that Stacey D’Erasmo presented at “Of Queer Neutrality: Apartness, Erasure, Intimacy,” the symposium and public roundtable on my book, The Decision Between Us, that was held on April 1, 2016 at the University of Toronto.

I am deeply moved by Stacey’s words and thrilled by the deep resonance between her thinking and writing and my own. Her book on intimacy and its written form in various works of literature and poetry is a revelation, and is its own guide towards an ethics of the nearly impossible-to-occupy space between. Many who attended the symposium have expressed their own appreciation and excitement of this text, and thanks to Stacey’s generosity, I am happy and honoured to be able to publish it here. The title is not hers, but one that I have given the essay, drawing from its own language and argument.

Thank you to John and to the Jackman Humanitites Institute for inviting me to this discussion. It’s a pleasure to be here. I have to admit that I was a bit surprised to be asked—I’m primarily a novelist, and I speak theory about as well as I speak French, which is to say enough to get around, order breakfast, ask for directions (take a left at Ranciere…), but I’m not fluent. The reason John asked me is that I wrote a book-length essay called The Art of Intimacy: The Space Between in which I looked at how it is that writers create a sense of intimacy on the page—intimacy among characters, between reader and writer, erotic and thanatopic intimacies, intimacies for which we do not have a name. I wrote this book for a literary series on craft and criticism, but I am sure that my book was very frustrating for any apprentice writer, because when I looked at various texts what I found was that these intimacies were not, strictly speaking, there. Instead, they were produced by what John, in his book calls the peri-space or the peri-performative: the space around, the space between. Our sense as readers that an intimacy had occurred was made by various meetings, often quite brief or glancing, in verb tenses, in the image, in murderous transaction, in white space, and so on. I opened the book with an epigraph from Gertrude Stein from the “Roast Beef” section of Tender Buttons: “The kindly way to feel separating is to have a space between. This shows a likeness.”

My job as a novelist is easier than any of yours because all I have to do is give the reader the feeling that something has happened, say an intimacy of some kind. If that intimacy was detonated in the margins of the page, in the syntax of the scene, in the shadows of the subjunctive, the reader, like Nancy’s image of Psyche, doesn’t know and doesn’t care. The reader—unlike the Psyche who is, of course, more awake in the myth than prone and unconscious or maybe dead—doesn’t lift the lamp. And if you say to the reader, as I did, ‘well, you know, the room is empty, the hat is empty, there is no rabbit, also no room and no hat,’ the reader basically shrugs. She already knew that. 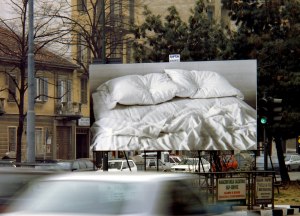 However, it would be highly disingenuous of me to say that I don’t see the stakes of John’s argument, that I don’t have stakes in it, that I’m a stranger here, I don’t speak the language, I am not subject to your borders, I’m just passing and passing through. Je ne parle pas Nancy. Because, as John points out in his discussion of Felix Gonzalez Torres’ Untitled, that image of the unmade bed on the billboard is not “the representational visual form added to a preexisting content (e.g. privacy, domesticity, coupledom), but is the very scene of the ethical-political contest over these various terms, and the performative spatial praxes to which they are conventionally assigned.” It seemed to me in reading John’s book that the image of an unmade bed—the proposition that there could be an unmade bed, that the bed could be unmade—kept appearing and reappearing: in Rauschenberg’s erasure of the de Kooning drawing, in the Mystic Writing Pad discussed by Freud, in the bed used by Duras, by Breillat, by Nancy; in Barthes’ embrace of haiku and photography and his impossible wish to be exempted from the image as a kind of social military service, in the Zen concept of satori. Barthes’ neutral, of course, is an unmade bed. Felix Gonzalez-Torres’ pile of candy is an unmade bed. The photographs in the book by Faucon and Baudinet are unmade beds.

This proposition is a scandal, and, as an American, it’s fitting to me that we are having this discussion in Canada, where the draft dodgers once went. John is clearly a gentleman and a scholar, but his proposition is obscene and getting more obscene by the minute. I accept, not without a certain amount of trepidation. I kept thinking about that queer slogan from the ‘80s, “An army of lovers cannot fail,” and how different it would sound to us today to say, “An army of exiles cannot fail,”—whoops—but then, of course, erase the army, erase the forward-moving syntax, erase the verb, erase the sense of failure of success, lift the sheet on the Mystic Writing Pad. All you’re left with are the exiles, and maybe even just the ex-. All lovers are ex-lovers. The term “queer neutrality,” socially, is an oxymoron if not an outrage. We are more wedded to identity now than we have ever been. Many of the people in their makeshift boats on the crossing die, because the space between is a perilous passage in which one cannot live. The prepositions to or from are mandated, and in very concrete terms. Indeed, the prepositions to and from have tremendous power at the moment. They are the prepositions du jour, if not de siècle. One can live and die of them.

Other prepositions—beyond, around, between, beside, before, after, behind—are powerless. They are the prepositions of the unmade bed. Scandalous prepositions, and propositions. To dwell in powerlessness, in between-ness, is a scandal as well, if not also high-risk behavior. To suggest that the phrase this place, as in John’s discussion of Gonzalez Torres’ two stacks of paper labeled “Somewhere Better Than This Place” and “Nowhere Better Than This Place,” refers not to one or the other places but to the place that is shared by both of them flies in the face not only of geopolitics but also of basic Western identity. Further, to posit that we already have the freedom to decide to partake in, to sustain, as John says, “the inappropriate space between us as no-thing and already unmade,” to take the candy and eat it, is increasingly unsayable. John seems to be suggesting that we take candy from strangers, indeed, that taking candy from strangers is a freedom we already possess. His book, itself, as much as the art works that are discussed there, offers us that invitation, that decision. It is an invitation to powerlessness, to traitorous collaboration, to unbecoming.

A novel that is an unmade bed, in these terms, is a novel that will not make up its mind, and, as a result, will not make up the reader’s mind. One can say that all writing, all novels, certainly, are already unmade beds, but that’s too facile. I can think of works that seem to me to be unmade beds—Gide’s The Immoralist, Duras’ The Lover, Theresa Hak Kyung Cha’s Dictee, Renata Adler’s Speedboat, all of Jane Bowles, all of Genet, of course. These are works of unbecoming—they unbecome the reader, and the pun seems apt as well. They are unbecoming books; they don’t make anyone look good, or bad, for that matter. They deliver us into a freedom from interpretation and identity that is uncomfortable. We become quite naked as readers. As John says, “what turns us on turns us out,” and I think the puns are apt there as well, being turned out as being exiled and being turned out as being prostituted, offered up to strangers, possibly strangers with candy. We are given or shown our freedom, our responsibility, our nakedness, and, frankly, this isn’t why most people read novels, or write them. The marriage plot is more popular now than ever.

The ability to discern this freedom, to dwell in it or at it, to see it as a decision that is always on offer, to apprehend works of art from this free position—by which I mean the neutral, the powerless, the partes extra partes—is severely constricted at the present moment. If you are without a place, you are an exile or a terrorist or a traitor. If you wish to be without a place, or attempt to be without a place, you have lost your mind. This is the moment in which we find ourselves. What fascinates me about The Decision Between Us is that John is not sounding a cry for liberation. His exploration rests on a freedom that is already there. The book, in this regard, strikes me as a kind of diagnosis or perhaps a punctum, to use Barthes’ term. I don’t know where to go from here. What has occurred to me in the wake of reading this book is a state I might call noticing. It seems to me, to return to Stein, a kindly way to feel separating, to have a space between, to show a likeness.